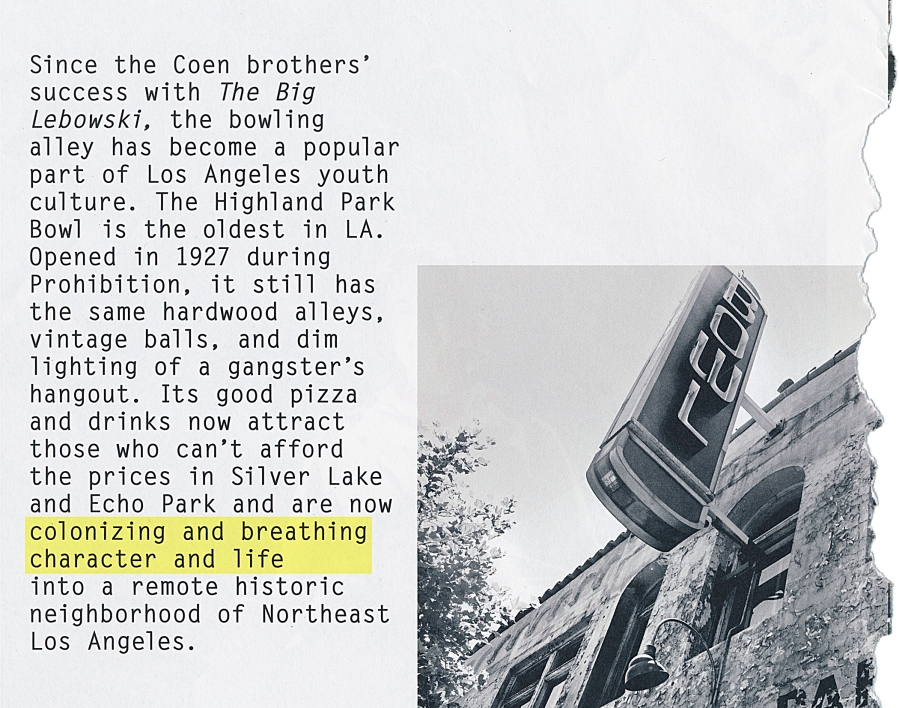 What was once Mr. T’s Bowl is now the Highland Park Bowl. The bowling alley described above in the blurb from Purple Magazine‘s L.A. issue. Previous to Mr. T’s Bowl destruction and re-branding as the Highland Park Bowl, it was a no-frills but great Los Angeles divebar and underground music venue. It was also the first place I got served an underage beer. The heyday of Mr. T’s Bowl had already largely passed by the time I started to go there, but it still served as a venue for NorthEast L.A. to showcase the kind of musical and creative acts that would not get any stage time in the Hollywood clubs.

I went to check out HPB once it opened and I almost felt physically ill by its transformation into some gaudy, neo-vintage bowling alley. What existed before actually bore history and this was just a simulacrum of it. It’s ironic that this short, badly-written blurb mentions the bowling alley in The Big Lebowski. That bowling alley which existed in East Hollywood is now gone; it stood just east of the 101 freeway. Like much of L.A. history it’s been erased, which is why newcomers to the city feel that they are breathing life into the city. But this city has always self-cannibalized to save face & make space. That’s part of its attraction to outsiders. A city of no-history where re-invention is possible. The fact of the matter is that Los Angeles is a place with a deep history, previous to European invasion & settlement. And even its settlement is rife with settler-colonial, racist and class-struggle history. Not far from the new Highland Park Bowl, is another bowling alley: All-Star Lanes. An almost dilapidated bowling alley which until fairly recently was one of the few last bastions of proletarian entertainment in Los Angeles: a city that is hellbent on erasing proletarian social life. The venue has often hosted underground Latinx punk shows.

Some 10+ years ago some friends started a localist blog to help us tell our own story about our part of the city, the L.A. Eastside. This was before gentrification crashed into us. What’s troubling about this blurb is how even in 2019 NorthEast L.A. is seen as “remote.” Back in 2008 the L.A. Eastside was almost invisible in both local & national media, so it’s not altogether surprising NELA is referred to as remote; but remote from where? These same friends also once had a radical space in NELA known as Flor Y Canto Centro Comunitario, from 2000–2005. A space where I learned about local anarchist history, the Situationist International, the Ultra-Left, Post-Left Anarchy and about what it could mean to live in a fundamentally different way. But these spaces don’t get memorialized, remembered by local media or even re-imagined the way Mr. T’s Bowl has been. There’s no money in it. Previous to FYC there were other spaces & projects in NELA like Radio Clandestino & Regeneración/Popular Resource Center in the 1990s (named after a Mexican Anarchist-Communist newspaper from a century ago). So here we are, in 2019, waiting to be revived and colonized by those seeking cheaper rents, and yet also agents of displacement. All this reminds me it’s important we write our own history on our own terms or else someone else will do it for us.